I have included a picture in this lesson that was taken at the Temple Mount in Jerusalem at the Western Wall, during one of my trips to Israel. I am standing beside, and touching, one of the many stones that marveled the disciples; as they walked by the Temple wall that Herod had built, about which Jesus had said that no stone would be left unturned. They are massive for sure, and the photo brings to life the area where Jesus would have walked during that last week in Jerusalem just before his betrayal. 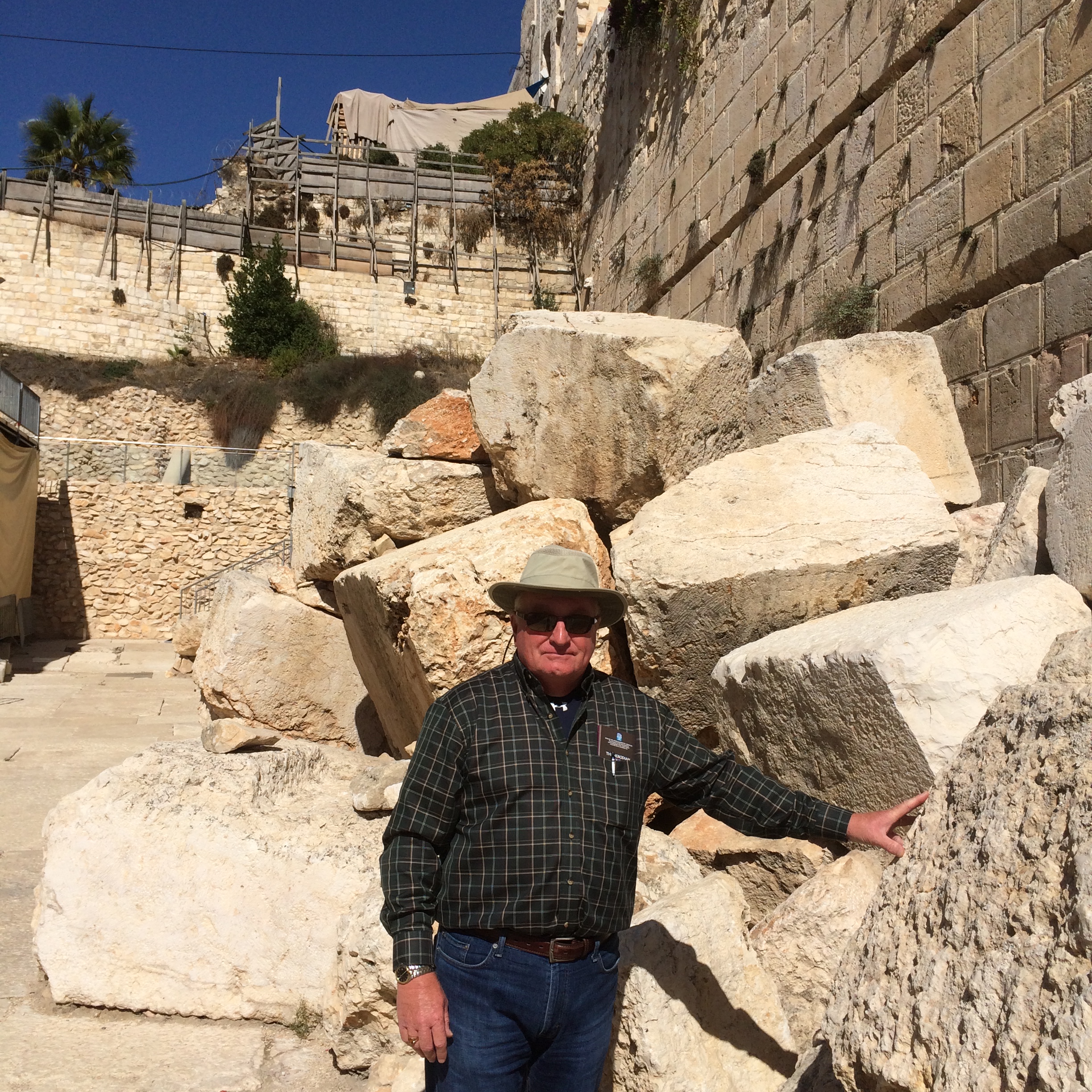 Let’s read Mark Chapters 14 and 15 and consider the following:

During the day on Wednesday, the Bible is silent regarding Jesus and his activities during the day. It would appear from Mark that Jesus chose to stay in Bethany on Wednesday. Clearly, by the time his teaching ended Tuesday, the chief priests and the teachers of the Law wanted him dead. We know from reading Chapter 14, that they had decided it would not be wise to kill Jesus during the Passover Festival. And yet, ironically, that is exactly what they do.

While dining a woman comes to Jesus and opens a very expensive bottle of perfume. In fact, the text tells us that it was worth a year’s wages! Referred to as Nard or Spikenard, it was indeed extremely expensive. Nard comes from a flower that only grows between 10,000 and 16,000 feet about sea level, and only in the Himalayan Mountains. The process of collecting, making, and transporting that type of perfume would certainly have caused it to be extremely expensive. In our lesson, we find a woman who felt that Jesus was worth it, and she was obviously a woman who could afford it.

On Thursday, Jesus gives his disciples very specific instructions about where they will eat the Passover meal. Mark 14:12-26 presents the well-known story of Jesus and his disciples during what we today refer to as "The Last Supper."

As Jesus’ cross-examination continues late into the night and on into early Friday morning, outside the courtyard, one of Jesus’ prophesies is being fulfilled. Peter is confronted on three different occasions and denies he knows Jesus. See Mark 14:66-72. The rooster crows, and Peter weeps, knowing that he has done exactly what he told Jesus that he would not do, i.e., deny him three times.

It is now about 9 a.m. on Friday—four hours from when the Sanhedrin plotted Jesus’ death. He has been handed over to the Roman guards for flogging and crucifixion. Mark 15:25 mentions "the third hour," while John 19:14 mentions "the sixth hour." These appear to conflict, but in reality it appears Mark was counting time with the Jewish method, which counts the hours from sunrise. John instead was using the Roman method, for which hours were counted after midnight. Thus, during the time period from 6 a.m. in John 19:14, until 9 a.m. in Mark 15:25, Jesus was mocked by the soldiers, Pilate’s verdict was issued on the two robbers, and preparations for the crucifixion were made.

The Centurion's confession is noteworthy for several reasons, since he was, after all, the commander of the squad charged with crucifying Jesus. As the Centurion in charge, he was directly responsible to Pilate. His confession tells us that he was an eyewitness to the crucifixion; and through what he witnessed, he came to recognize Jesus as the true Son of God. This testimony would have carried great weight later with the Roman readers of Mark’s Gospel. We will get an additional brief glimpse of him later in this chapter, as he confirms the death of Jesus to Pilate.

A question is often raised, "How do we know that Jesus actually died on the cross? He could have simply passed out from all the pain, and then came to, once he was laid in the cave." The four Gospel accounts give us plenty of evidence that Jesus was indeed dead. One of the most compelling is the role that the Romans played in every crucifixion. Specialized squads of Roman soldiers, lead by a Centurion, were well-trained in killing through crucifixion. Crucifixion was meant to be a slow tortuous death, with the final blow being the breaking of the condemned person’s legs. In Jesus’ case, that was not necessary, as he died early in the process. It was not unusual for a crucifixion to last several days, for example. Like today’s modern prison executions, the executioners are trained specifically for making sure that the prisoner dies as a result of the execution. The Romans were skilled at crucifixion, they knew how to make sure that the person actually died on the cross and certified that the person was dead before they were removed from the cross. The Centurion was the leader responsible to ensure that death occurred.

Mark then tells us that Pilate gave the body of Jesus to Joseph of Arimathea. Joseph had a tomb already dug out of rock; and within it, he had a shelf where he laid the body of Jesus which he had wrapped in linen. He then rolled a large stone across the opening of the cave, sealing the tomb just as Passover was to begin. From 5 a.m. with the Sanhedrin’s evil plan to have Jesus killed, to his death burial a brief twelve hours later, the Jews must have been very happy. After all of Jesus’ teachings, healings, and other miracles over a nearly three-year period; his enemies plot and actually have him killed and buried in less than twelve hours—at least that’s what they think.

As I reflect on this lesson—a lengthy one for sure—I am struck by the various individuals mentioned in this chapter. Jesus meant different things to different people, and he evoked certain reactions from each. The same is true today. Politicians may try to downplay him (or discount him altogether), detractors will tell lies, and those of weak faith may fade into the shadows. Political expediency will rule today, just as it did then. But the true followers of Christ—whether they be the lowly women who quietly served Jesus faithfully in the background, or the wealthy and bold like Joseph of Arimathea—allowed their public acts, their works, to demonstrate their faith in Jesus, regardless of the consequences. Can we say the same about ourselves today? When Jesus returns, will he find us as faithful as the two Mary's, Salome, and Joseph of Arimathea?

Have a great week everyone, and thanks again for studying with us!