In this lesson, we will be examining Chapter 5 of Mark, and I believe we will discover things in this lesson that we haven’t noted before, even though the passages are very familiar to many of us. Just as we have seen in previous lessons, large crowds continue to follow Jesus and his disciples. As the chapter opens, we find Jesus once again on a boat. You will recall from our last lesson that, after teaching on the shore of the Sea of Galilee—and with the crowds growing very large— Jesus got into a boat in the evening and sailed across the Sea of Galilee to the other shore. During the trip, they encountered a great storm. Demonstrating his power over the elements, Jesus calmed the storm and the sea.

In the current lesson, Jesus and his disciples are arriving on the other side of the sea, at Gerasene. Here, Jesus will demonstrate his authority over the demonic world. It’s interesting to note that Chapter 5 is comprised of three teaching events, one with the demoniac at Gerasene, and the other two demonstrating both his power to heal as well as his power to raise people from the dead. I have included two pictures of the Sea of Galilee, one showing a calm sea and a boat traveling from one shore to the other just as Jesus and his disciples would have done on many occasions. The other picture is taken from the eastern side of the Sea of Galilee, it shows us what the countryside looked like, especially along the shore, as Jesus landed in the beginning of Chapter 6. 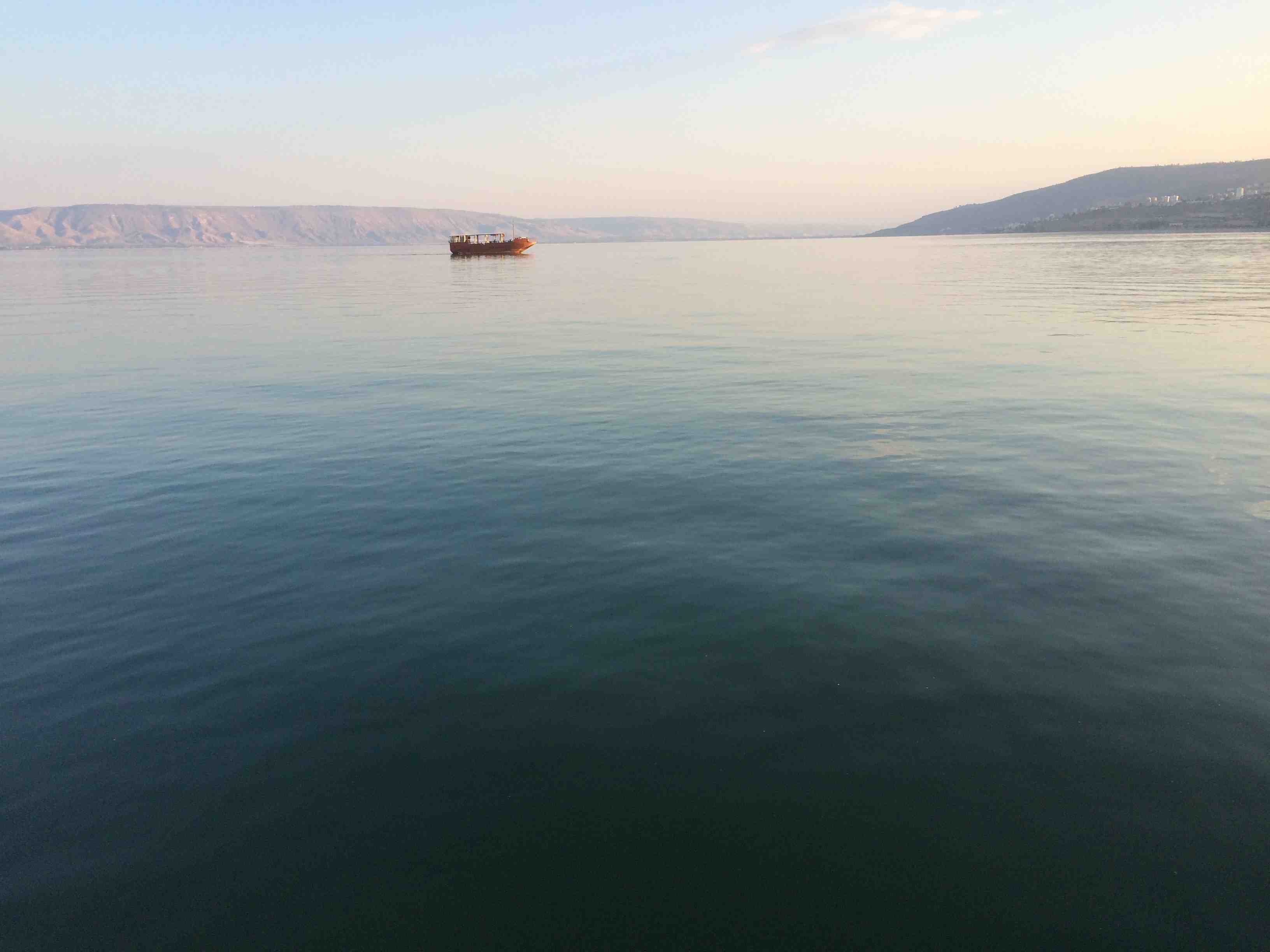 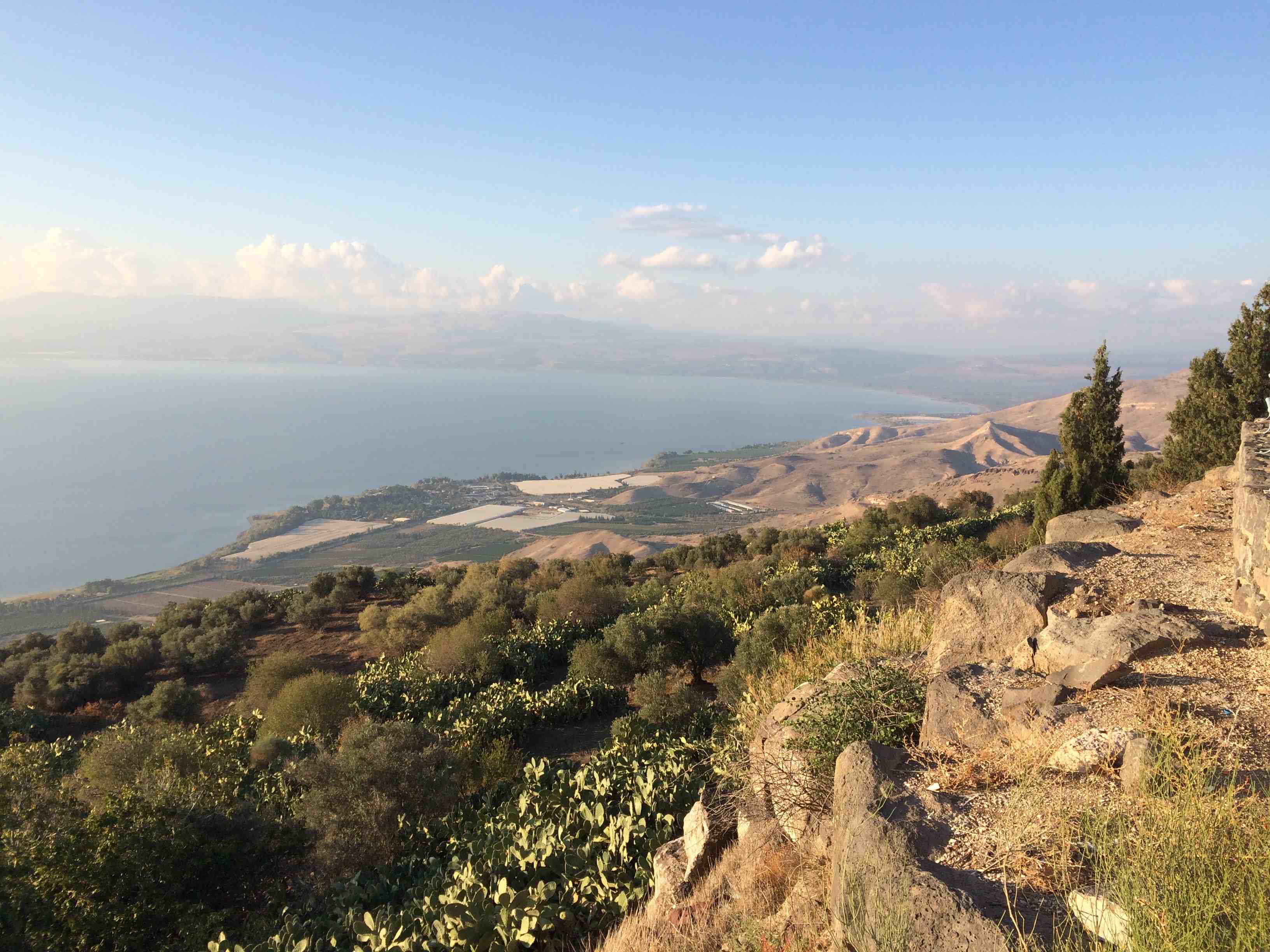 In our study, I would like you to consider a question that perhaps you have never considered before. Specifically, we have already seen in just five chapters of Mark that Jesus was attracting crowds in the thousands. They were coming from all parts of the area, from as a far south as the land around Petra, and from as a far north as Lebanon. These are people who were surrounded by, and living in, a very religious culture with strict religious leaders. Isn’t it interesting that the Jews themselves would be so hungry for spiritual truth, healing, and forgiveness that they traveled all over the Sea of Galilee just to hear Jesus? And the Gentiles did as well, as we will see in this lesson. Do you think this observation might also apply today?

For example, today we live in a country that was theoretically founded on solid Christian principles—and yet many in this country continue to seek answers from everything and everyone except Jesus. Clearly the "church" would appear to be failing—but is it? Do we need to take a step back and look at the Gospel message being preached today? Is it addressing the needs of the people it should be reaching? Have we either abandoned the main doctrines of the faith or watered down grace to the point where it is of no value? Are we more concerned with looking like Christians and being politically correct, rather than spreading the gospel? Have we forgotten what the lost look like? Have we gotten so comfortable in church, that the very work of the church has been forgotten?

I ask these questions because clearly this was the case in Jesus’ day. The Jews who were to be "the light unto the Gentiles," were not. In fact, they were not even light unto themselves. Those responsible for administering the faith had abandoned the truth and sought instead to elevate themselves for personal gain and attention.

Today is no different. Millions are lost and are looking for the truth, i.e., the Gospel of Jesus Christ. May we as followers of Christ, and as a nation founded on Christian principles, begin a great revival, so that, like Christ, the crowds who come to hear the gospel are many, in the hundreds of thousands. The need is urgent, and the time is now. We need to get in our boats and go fishing for the millions of lost souls around us.

So let’s join Jesus as his boat comes ashore in the region of the Gerasenes. Just as he arrives, he is met by a demon-possessed man. There is much we can learn from this account in Mark Chapter 5.

At the beginning of this lesson, I said that I believed we would see things in this passage that we had not noted before. Clearly that was the case for me. When we look at both the demoniac and the little girl who died, we see that Christ used his authority over both the demon world and death. He did not need special incantations, man-made objects, or any magic. He spoke, and it was so. This is the power of Christ.

We saw this as well with the woman who had bled for twelve years. It wasn’t Jesus’ magic cloak that healed her; it was her faith in Jesus. Nothing made, or invented, by man comes close to the real thing, whether it be our portrayal of the demonic world or our ideas about them. Jesus tells us that if we know him, we will know the truth, and it will set us free. Never put your faith in anything man-made or imagined by man.

If you are uncertain of your relationship to Christ; if you are more interested in the demonic world than you are the eternal world that awaits those who follow Christ; if you are fearful of the world around you (both seen and unseen); if you think that there is no hope; then today is the day to place your faith in Jesus. Today is the day to surrender and see the miraculous things that Jesus will do in your life. Just as he created three new people in the events of this lesson, he will give you new life as well. We are saved by his grace; all you need do is ask him. Simply read John 3:16 and ask Jesus to come into your heart today. He will change your life forever.

Thanks for studying with us! Have a great week!