It’s Official: The World's a Mess!Discussion

The world is definitely a mess, and on so many different levels that it can be scary. We have political turmoil, economic turmoil, injustice on a global scale, poverty, famine, earthquakes, strange flesh-eating viruses, armies overthrowing governments, people in revolt, and none more dramatic these days than in the Middle East. 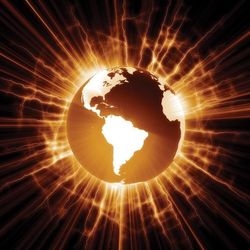 Being an avid student of End Time Prophecy, I often hear from people alarmed by the latest headline, conspiracy theory, or disaster, and that the event in question clearly points to the pending end of the world. This reminds me of jigsaw puzzles, and how after diligently searching through a pile of hundreds of puzzle pieces for hours, finding just one piece that fits makes us believe we’re almost done with the puzzle. It’s amazing how ready we are to take a single event or even two and a couple of Bible verses—and immediately we "know" that the end is upon us.

Let me say unequivocally that yes, the world is coming to an end. There is no doubt about it. God clearly lays that out throughout the Bible, and just as clearly He advises us that HE is the ONLY one who knows when it will happen. He wants us to know about it, and even more so, He wants us to know that He has a plan of salvation for every person on the face of the earth before the end comes. However, He also wants us to know that it is His plan, not ours; and for our part in this whole event, he has given us very clear direction. He has provided specific instructions regarding exactly how we are to handle the coming end, just as he did for his disciples who thought the end was near in their lifetime as well. Even Paul believed that Christ’s return was imminent in his own lifetime.

Christ answered them as he answers us today regarding the matter of when the end will come. In Luke 21:8, he told them specifically to "Watch out that you are not deceived. For many will come in my name claiming, ‘I am he’ and ‘The time is near’. Do not follow them." That same command applies to us as well today. Don’t let the headline or "disaster of the day" distract you from the task at hand. The world is a mess today, absolutely, but it was a mess when Christ walked the earth as well; and in fact, the world has been a mess ever since Adam and Eve sinned. Keep your eye on the Cross—the world is always going to be in turmoil.

Christ continued this counsel to his disciples in Luke 21:9: "When you hear of wars and uprisings, do not be frightened. These things must happen first, but the end will not come right away." And in Matthew 24:6-8, he told them "Nation will rise against nation, and kingdom against kingdom. There will be famines and earthquakes in various places. All these are the beginning of birth pains."

What are we to do then, just set back and let the world spin out of control? Or should we wait until we see the eastern sky crack open and Christ’s return to set up his kingdom? No, again Christ gave us very specific instructions—commands actually. In Matthew 24:13-14, he tells us "But the one who stands firm to the end will be saved. And this gospel of the kingdom will be preached in the whole world as a testimony to all nations, and then the end will come."

How can we do that? How can we stand firm in the midst of so much turmoil, chaos, uncertainty and times of great anxiety? John tells us exactly, in 1 John 4:4—"Greater is He who is in you than he who is in the world". Because of Christ, we can stand firm, unwavering in our faith. John goes on to tell us later, in 1 John 5:4, that "everyone born of God overcomes the world. This is the victory that has overcome the world, even our faith". By placing our faith in Christ and standing firm in the Gospel, we can "stand firm to the end".

Christ went on to give us very specific instructions regarding what we are to be doing until He returns again. In Matthew 28:19-20, he commands us to "Go therefore and make disciples of all the nations, baptizing them in the name of the Father, the Son, and the Holy Spirit, teaching them to observe all that I commended you; and lo, I am with you always, even to the end of the age."

We can’t ignore the world around us, and we should be praying for "the peace of Jerusalem", especially given all of the unrest in the Middle East. But let’s also keep our eye on "the prize of the high calling of God in Christ Jesus" and focus on the Cross, not the headlines. Let’s be about the Father’s work in His Kingdom—and let God take care of the rest.

Serving with you in Christ’s name,